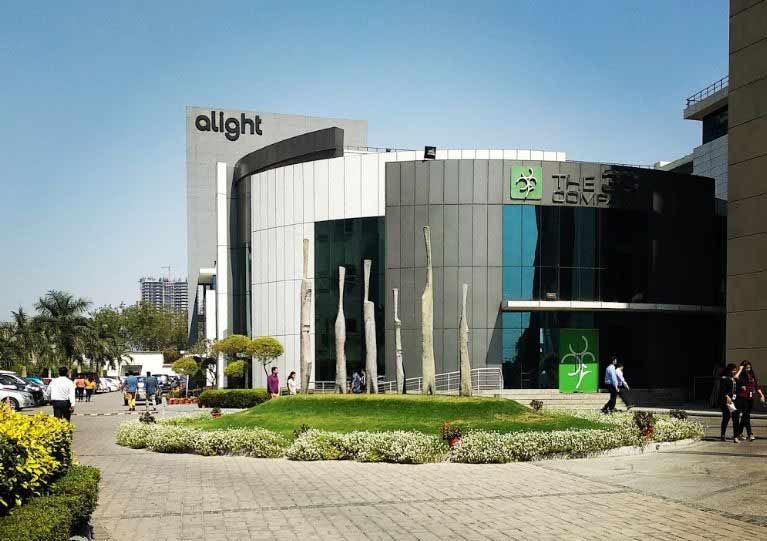 Architectural passive features - Mutual shading of buildings, central shaded court, optimum window wall ratios, service cores of the towers on west and east to block harsh sun. Low ground coverage and stilts, 90 percent parking in basement, to maximize landscape areas are all strategies to helpreduce heat island effect. Optimum footplates to capture light and views from both sides for work spaces. Longer facade on north and south (with more glass on north and south), heat reflective glass high performance glass are some of the key architecture passive strategies to improve energy efficiency of the building.

Tech boulevard, buildings are designed around a central court in a way that each tower gets it own identity and visibility while "being part of the whole " campus; sharing resources and spaces for efficiencies and interaction.

Sunken courts and stilted areas at periphery of the towers not only form part of the social space of central court giving more flow , dynamism,visual appeal but also bind the campus by connecting public realm and social spaces with the common facilities like gymnasiums, cafeterias etc which are part of lower groundfloor of the towers. These courts help get in daylight and view to the workspaces and facilities in the lower ground .These sunken court help connect towers with each other at through landscape areas making each tower "part of the whole", i.e. part of the tech boulevard campus; while still giving identity and individuality to the campus.

It holds true for tech boulevard campus that "the whole is more than the sum of its part".

Recycling and treatment of entire waste water for flushing, landscaping and for cooling tower makeup as well as strategies of rain water collection and reuse help the campus in being a zero water discharge.