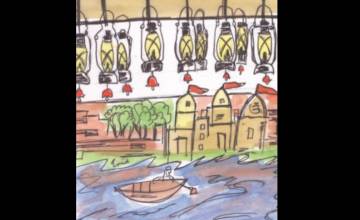 Lanterns in this age of LED neon lights and what not are just out of place though still a nostalgic reminder of the good old days when life was so much simpler and easy to live without power cuts. Architect Vidur Bhardwaj perhaps mounted an exhibition Soul in Structure at the Visual Arts Gallery as if to bear this out.

His Portraits of the Past included an array of lanterns hanging in a row like the seven stars seen in the sky at night though they were unlit. This reminds one of an unlit lantern hanging in the foyer of a house which attracts the attention of a Downs Syndrome boy who passes by it every evening with his father while on the way to the market. He always points out to it and probably wonders why it remains unlit.And loone evening the lantern was indeed lit which enthused the child greatly.

The Lantern Man Bathiyonwala Baba who sold lighted lanterns is long dead but even so Vidur’s exhibits drew a lot of attention with one critic remarking quot;Fathehpur Sikri is known for its transitory spacespavilions porches and verandahs and Varanasi cannot be divorced from its ghats nor Old Delhi from its streets.quot; What she however forgot to add was that some of the Walled City’s bylanes are still not bereft of the old Municipal Committee lamps. Even Gali Kababianwhere the main Karim Hotel is located used to be lit up by one such lamp till the 1975-77 Emergency days.

Meanwhilethe lantern in Vatika Apartment South-West Delhi continues to dream in vacancy of the approaching night when the house lights will be switched on and get reflected in its chimney. Incidentallythe hurricane lantern made its debut in the 19th century and found a ready market in Delhi where lamps unprotected by a glass chimney often got extinguished by the breeze.

Housewives were the ones who most enthusiastically welcomed the hurricane lanterns’ arrival though they pronounced the name as quot;Hurrikan Laltainquot;. Wellas the Bard said quot;What’s there in a name since a rose will smell just as sweet by any other name!quot; So also the utility of the lanterns whose exhibition ended last Thursday.