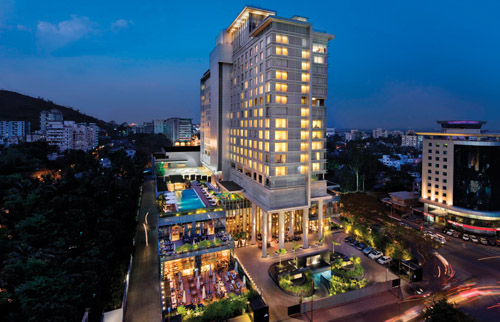 The Green building movement has gained tremendous impetus during the past several years and it is projected by the Indian Green Building Council that the market for LEED-rated green buildings in India will be $5 billion by 2012 and the total market for green building materials and products is estimated to be over 10 times (around $45-50 billion) the size of the LEED-rated green building market in India. Hence it is apparent that the market is large and expected to grow exponentially, therefore more professionals and entrepreneurs are vying to enter into this market to make available certified green products for green projects construction, reports Maria.R

"Green" is regarded as 'the voluntary pursuit of any activity which is concerned with energy efficiency, environmental management, water management, renewable energy, and waste management and recycling' - CII - Godrej Green Business Centre, India

Green Building is described as a structure that ensures efficient use of materials, water, energy and other resources without depletion of nature and minimal generation of non-degradable waste. The term Green Building is often used in combination with 'high-performance building,' 'sustainable design' and 'preserving precious resources.' Although the green buildings concept was prevalent in India from the time of our ancestors who revered the five elements of nature Earth as 'Prithvi,' Water as 'Jal', Agni as 'Energy', Air as 'Vayu', and Sky as 'Akash' but it was lost somewhere and now through the LEED (Leadership in Energy & Environmental Design) and other green building rating system, we are rediscovering the same Indian ethos again.

Architect Vidur Bhardwaj, of Design and Development, who designed the Wipro building echoed that the concept of green building was started in India approximately 1,000 years ago, and was a way of life. According to him, the havelis that built hundreds years ago had thick walls, jharokas and jaali windows that cooled the air along with water bodies in the central courtyard. Adding he said that green architecture has been the part of our civilization that started getting lost in the 1920s. Like most other Indian concepts that have caught on in the West, to be later aped by India, green architecture too is seeing a similar trajectory.

In the last few years, green building construction has made significant inroads in India and today it has emerged as one of the world's top destinations for green buildings (ranging from residential complexes, exhibition centers, hospitals, educational institutions to laboratories, IT parks, airports, government buildings, corporate offices etc) and implemented a number of rating systems (LEED-India, GRIHA etc) which open up a wide range of opportunities in construction, architecture and engineering design, building materials and equipment manufacture. The Green Building Movement in the country is pioneered by the Indian Green Building Council (part of CII) and currently, India boasts of 1239 registered buildings, 187 certified buildings with 855.96 million sqft Green building foot print.

"With a mere beginning of 20,000 sq ft in 2003, India's green building footprints have grown manifold to date and according to the CII study and statistics which estimated that the market of green building construction is set to grow somewhere around $40 billion by 2012 which shows that the outlook is very positive," said Mr. Hemant Shah, Chairman, Ackruti City Limited. He added that the phenomenon is driven by two main factors. Firstly, the construction industry is an ever-growing one, and secondly, the issues related to energy, water and environment have taken precedence. These trends suggest significant and growing market opportunities for green buildings in India. In fact, it is said that by 2015 India is going to become the forerunner in developing green buildings and green communities, which itself says how large the market is going to be." We at Ackruti group is completely committed to the concept of sustainable development and our projects are in compliance with highest standards of norms set out for green buildings. Towards this end, we are launching many new projects which will be developed on green principles, he added.

What makes a Building Green?

Green building materials are composed of renewable, rather than nonrenewable resources. These materials are environment-friendly and offer specific benefits including reduced maintenance/replacement costs over the life of the building, energy conservation, improved occupant health and productivity, lower costs associated with changing space configurations, greater design flexibility, and so on.

A building is called green when it has tremendous benefits, both tangible and intangible. The immediate and most tangible benefit is in the reduction in water and operating energy costs right from day one, during the entire life cycle of the building. The savings could range from 25 â€" 40 % depending on the extent of green specifications (Energy savings: 20 - 30 % and Water savings: 30 - 50%). The intangible benefits include enhanced air quality, excellent day lighting, health & wellbeing of the occupants, conservation of scarce national resources and enhance marketability for the project. 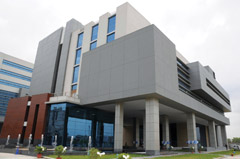 Green Products and its Market